Posted by Matt on August 24, 2017
Posted in: Uncategorized. 2 Comments

I know I’m not as active as I used to be on this guide, part of that is the rigors of day-to-day activities as I get older (and my children getting older). But, I’m trying to become more purposeful about updating things.

The Bristle Woods Rift is a really cool place to hunt, and it has reignited my interest in the game, an interest that was waning to be sure. You can view the page here, it’s still under construction but I’ll finish it up very soon. 🙂

Content Updated – And my thoughts on the direction of the game

I finally uploaded the Furoma Rift section. You can find it here.

Some of you may be wondering what is up with my guide. Well, to be blunt, I have not been a fan of the direction that the Hitgrab team took Mousehunt in 2016. I’ll post more in-depth thoughts later, but I was willing to look past that if my guide was made one of the official guides of the game. I requested the Devs look at this over a year ago when they only had one guide listed as an “official” guide (Spheniscine’s Guide). And don’t get me started on this guide, it hasn’t been updated in 2 years. This was why I wrote the Devs and asked them to consider my guide instead.

However, as usual, I never heard anything despite repeated attempts to contact them. Michele did “friend” me on Facebook, but repeated efforts to reach out to Dave have failed.

They HAD to, however, look at their situation and realize that Spheniscine’s guide was not sufficient, so they added “MozKa’s Definitive MouseHunt Guide.” I have nothing but good things to say about MozKa’s guide. It’s well organized and he’s a good hunter. But, the lack of response to me was disheartening. I’ve put a lot of effort over the years into this guide.

Then, what felt like a slap in the face, not long ago the Devs added a “FAQ” to the Lore Tab. My guide is called “Mousehunt FAQ.” Perhaps this was a coincidence. I’m sure it was, but it struck a nerve with me. So, they list TWO guides as the official MH guides and one of those is DEFUNCT! Now you understand my frustration with the game, with the devs, with just about everything in 2016. Furoma Rift was a bad release. Fort Rox was an unmitigated disaster and, though I will add it to my guide eventually, I am holding out, hoping they modify it because it just sucks right now. Sucks hard.

I love this game. I have been playing for almost 8 years. I have not known my daughter without knowing Mousehunt, and she’s in second grade. This game is a part of my life. I have devoted time and money to it. But I have serious concerns about the direction of the game, and the longevity of it. I will offer more indept analysis of my ideas to help improve the game, here and on the forums. My hope is the devs read them and take them seriously. This game needs help. It needs new blood. It needs to be jump-started.

To everyone who follows my guide, thank you. Please pass this along to your other MH friends. I want to get more active here and post more updates. I’m just very frustrated with the state of the game and the direction.

To let you all in on a little secret, my work and personal life have been absolutely insane the past 6 weeks, but at least the personal side will start to get a little calmer after this weekend, as my family and I are moving into a new house on May 27. Those of you who have gone through a big move know what it’s like!

Because of all this, I’ve had little time to devote to updating the guide with the release of the Furoma Rift last week. I have already completed the Adventure Book entry on it though, and I feel that I have a strong grasp of the strategy involved now – so the guide will be updated soon – hopefully in the next few days.

I thank everyone for your patience, as I have not been able to respond to many comments on the site in the past 6 weeks. But hopefully that will all get better soon!

Thank you again to all the followers of this site and for your continued support!

Posted by Matt on March 1, 2016
Posted in: Uncategorized. 2 Comments

No images right now, I’ll add the preview once I get to my computer. But wanted to let you all know that all signs point to March 3 being the start of Mousehunt’s 8th birthday celebration!

King’s Prize Key
You’ll find these prize keys as loot any time you capture a prize mouse and also very rarely as loot from any other mouse in the Kingdom. Recovering a key for the King will allow you to open one of 10 Mystery Prize Packs by clicking the banner above your hunter’s journal. Once you’ve opened the 10 main prize packs you can use extra keys you find to open smaller bonus prize packs!

These keys will expire a few days after the giveaway ends. Make sure and use all your keys!

SUPER|brie+
The most prestigious bait in the Kingdom has a tasty new look! Complete with sparkling Magic Essence, the new-looking SUPER|brie+ has all the same amazing powers of attraction it had before!

Mobster mice are on the loose with their pockets full of delicious SUPER|brie+ and you’ll also find some SUPER|brie+ in one of the King’s Mystery Prize Packs!

Prize Packs
The King has assembled 10 Mystery Prize Packs for each hunter, however, mice have run off with all the keys! You’ll recover a prize key each time you capture a prize mouse, however, you may also very rarely recover a key from any mouse in the Kingdom.

Within the 10 Mystery Prize Packs you’ll find juicy rewards. Larry was able to sneak a peek while some were being wrapped and recalls seeing SUPER|brie+, King’s Credits, powerful charms, and more!

The King’s Arms is stocking a new item capable of applying specific calibrations to your Daily Loyalty Chests and gifting quotas. The calibrator is purchased for 1,000 gold and it provides a variety of unlocks and abilities which are purchased with King’s Credits.

The calibrator can be used to change the type of cheese you receive on day 2, 3, and 4 Daily Loyalty Chests. There’s a wide range of cheeses to choose from including Limelight, Dewthief Camembert, Glowing Gruyere, and more!

Other abilities you can buy for your calibrator are increasing the amount of gold found in your Daily Loyalty Chest as well as increasing the quota of free daily gifts you can both send and receive.

Visit the Collectibles section of your inventory to configure your King’s Calibrator after purchasing it. 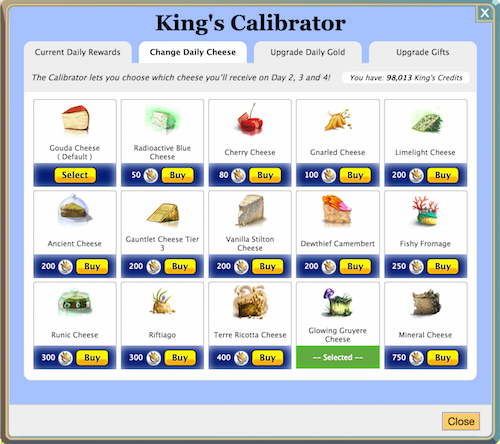 As a reminder, mouse migration patterns changed a while ago and affected how these rare breeds can be hunted. Hunters no longer lose a piece of cheese or a charm when encountering a prize mouse. Prize mice now wander nearly everywhere in the Kingdom where they have developed a keen interest in their fellow mice, often following a mouse towards a hunter’s trap.

After successfully attracting any mouse, you may find a prize mouse also visits your trap. However, the encounter with a prize mouse will not leave it with enough time to snatch any of your cheese or charms. The result: Encounters with prize mice will no longer affect progress in any areas and will not consume any cheese or charms.

Prize mice can be now encountered using any type of cheese. They can be encountered in any location other than the Meadow, where Larry’s more vigilant watch appears to scare prize mice away. 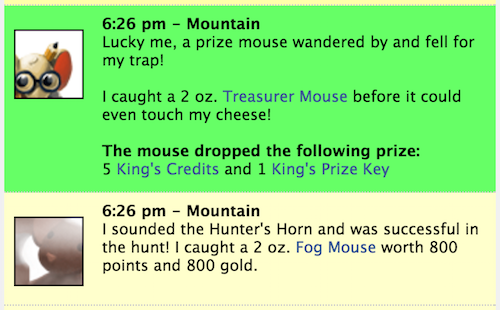 Rainbow Scroll Case
While snooping around the Prize Vault, Larry noticed something special being packed into one of the King’s Mystery Prize Packs — a colourful scroll case! These Rainbow Scroll Cases contain a massive map with 60, 100, or 120 mice!

The length of map you’ll receive scales with your Hunter’s title:

Each hunter will find a single Rainbow Scroll in one of their mystery packs. Before opening yours, you may want to make sure some friends are not currently on maps themselves and can help you with yours.

Choose when to open your scroll case and pick your map mates wisely, hunters!

Not interested in finding the chest? Rainbow Treasure Maps can be completed at anytime by claiming the consolation prize. You’ll receive a portion of Gold, Points, and Ancient Charms based on the number of mice you and your map mates found. 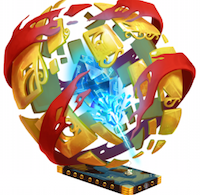 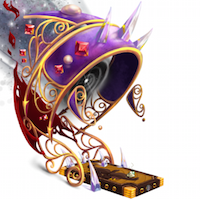 Available from the King’s Arms are three new trap skins you can purchase with King’s Credits. The Lavish Infinite Labyrinth Skin and Regal Temporal Turbine Skin provide an absolutely royal look for two powerful traps, while the Manticore Trap Skin provides a more fierce look for the Chrome Sphynx Wrath. 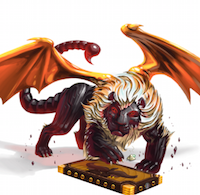 Posted by Matt on December 15, 2015
Posted in: Uncategorized. Leave a comment

The Great Winter Hunt of 2015 has started, and it’s quite a bit different than previous events (which is a good thing)! There are some elements that have been incorporated into the event from previous years, but for the most part, it’s brand new!

This year is a Toboggan theme! I’ll be adding content to the 2015 GWH page as I progress and learn more, so please leave comments on that page for other hunters as well! We’ll learn together!

One thing of note: There is a pretty serious bug that is affecting the use of NITRO. If you use your last available Nitro, at the present time, it will NOT work. Meaning, if you have 100, the first 99 will work as planned, but the last one will not work until Dave and team fix the bug. Please keep this in mind as you are hunting! The devs are hard at work to correct the issue, you can rest assured.

Posted by Matt on November 30, 2015
Posted in: Uncategorized. Leave a comment

I have started my house-cleaning on the site, and have re-arranged the menu above to make it flow a little easier.

I also have my own domain now! No more “wordpress” in the URL, we are now a legit site! I’m still using WordPress to publish the site, but the domain is now my own! 🙂

I have also added a section for events! Check out the 2015 Great Winter Hunt page! I will be adding content to it as it is released! Here is a snapshot of the 2015 GWH HUD!

I am going to go back and provide historical information for the other events. I am not going to go that much in-depth, but just provide a look into what occurred, along with a few comments of mine. Obviously you can find this info on the timeline of events on the Wiki, but here you’ll find my opinions and editorialized comments! 🙂

Happy hunting everyone, and thank you for the comments and emails. Keep them coming.